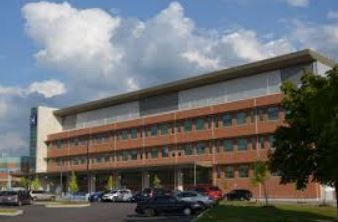 Stouffville Hospital is located at 381 Kirk Street Markham Ontario L3P 7P3. The hospital is located on the border of Markham and Stouffville, the Community Hospital is equipped with 329 beds and the hospital provides emergency services programs in acute medicinal care and surgery, mental health addiction and also has a sector for children and childbirth. The hospital along with its partners employs 500 Physicians 23 midwives and over 2,300 staff and that doesn’t even include the 1,300 volunteers. The hospital Services residents of the city of Markham Uxbridge and Whitchurch-Stoufville.

After originally opening its doors in 1990 city of Markham has grown enormously. The Hospital recognized that they needed to expand this expansion started in December 2010 and finished in August 2014. From this expansion the hospital doubled in size which gave way to increasing surgical services oncology services, mental health services child services and much more.

The hospital is also equipped with a heliport the original heliport was located on the East End of the hospital. In 2014 the hospital was rebuilt and the helipad is now located on the roof of the new emergency wing this makes it much easier to transfer patients into the hospital building. The new location of the helipad also provides a safe for landing area the old helipad was close to public roads. The old pad is also being turned into parking.

At the start of 2004 Markham Stouffville Hospital partnered with Uxbridge Cottage Hospital located at 4 Campbell Dr, Uxbridge ON L9P 1S4. The Uxbridge Cottage Hospital originally opened its doors in 1959 it was a small two-story brick hospital with 25 beds. The hospital offered medical and surgical Care Emergency Services and obstetrical services. Since opening many changes have been made to the hospital and this has been in part with dealing with the rapidly developing community. The Markham Stouffville Hospital partnership has really injected new life into the hospital and helped incorporate new technology an up-to-date management processes which are vital to patients of the hospital.

Up next – Bayview Golf and Country Club